As MPs depart Westminster for the summer parliamentary recess, we are taking stock of an important piece of legislation for the insolvency and restructuring profession, and its progress so far through parliament.

At the end of June and beginning of July, the Rating (Coronavirus) and Directors Disqualification (Dissolved Companies) Bill passed through two important stages in the House of Commons: the Second Reading and Committee Stage.

R3’s views on the Bill were referred to extensively during these debates by Shadow Insolvency Minister Seema Malhotra MP – including at the despatch box.

We were also invited to give evidence to the House of Commons’ Public Bill Committee at the beginning of July, with our Immediate Past President Duncan Swift representing R3 at this session. Labour subsequently tabled amendments to the Bill based on concerns raised by Duncan and other witnesses.

This blog post sums up the Bill’s passage, and how R3’s views have been highlighted, through the parliamentary process so far.

We have broadly welcomed the draft legislation as it should help deter directors from using dissolutions to avoid scrutiny and liabilities. However, we have concerns around the Government’s approach to using this legislation.

Ahead of the debates in the House of Commons, we felt that there were three key questions that the Government needed to answer to make this policy more effective:

1. How will these additional investigations be funded?

R3 members have already expressed frustration that not all of their reports – even where serious breaches of the law are suspected – are acted on when reported to the Insolvency Service, due to resourcing issues. With the Service set to receive many more potential cases on top of its existing caseload, the Government's decision to increase its powers must be matched by an expansion of the resources available, so that investigations into directors of dissolved companies do not come at the expense of investigations into directors of insolvent companies.

2. How will the Government actually prosecute those directors of dissolved companies it identifies as culpable?

Director disqualification is often not much of a deterrent to committed fraudsters and, on its own, does not facilitate payment to creditors.

The Government has indicated that it will use Compensation Orders as the way of recouping monies from those directors identified as having committed these fraudulent activities. However, where there are multiple creditors, an insolvency procedure is likely to be better suited to recovering monies owed to these creditors. Very few Compensation Orders have been issued since their introduction and it is not yet clear whether they have been a completely successful addition to the redress-seeking toolkit. In contrast, thousands of insolvency procedures take place every year that return hundreds of millions of pounds to creditors.

The Government should also make it easier and less costly for creditors and the insolvency profession to restore a company so that it can be placed into an insolvency procedure and the company’s assets realised for the benefit of creditors.

Ahead of the debates on the Bill in the House of Commons, we briefed MPs to highlight our concerns.

At the Bill’s Second Reading in the Commons on the 28th of June, Seema Malhotra MP – who is Shadow Minister for Business and Consumers, with a portfolio of responsibilities covering insolvency – quoted directly from our briefing at the despatch box, noting that “R3, the insolvency and restructuring trade body, has highlighted its members’ concerns that not all their reports to the Insolvency Service are acted on, even where serious breaches of the law are suspected, due to resourcing issues”.

The Shadow Minister for Local Government, Jeff Smith MP, also quoted from our briefing that “the Government needs to ensure that a lack of resources does not lead to investigations into directors of dissolved companies coming at the expense of investigations into directors of insolvent ones”, and referred to our questions around the Government’s approach to recouping monies from dissolved companies, where the directors have been found to be culpable.

We were then invited to give evidence on the legislation to the Public Bill Committee in Parliament on the 6th of July. Our Immediate Past President, Duncan Swift, represented R3 at this session. 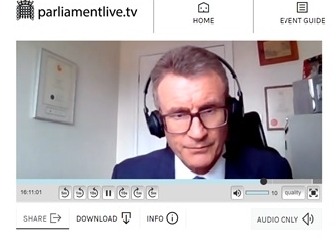 A link to the section of the transcript covering Duncan’s session transcript can be found here, while a recording of the session can be viewed here.

Two days after the evidence sessions, MPs examined the Bill in further detail at the Committee Stage debate on the 8th of July. We were pleased to be quoted extensively at this session and see longstanding R3 member concerns about the way in which this aspect of the corporate governance framework operates mentioned at length on the floor of the House of Commons.

Referencing R3’s, and other witnesses’, concerns about the Insolvency Service being adequately resourced to cope with the increase in investigations, Labour tabled two amendments to the Bill: for the Secretary of State to report every three months how many companies the Service has investigated and disqualified; and for the Secretary of State to lay an assessment of how effective the legislation has been one year on.

Explaining these amendments, Seema Malhotra directly quoted the evidence Duncan gave the Committee. She mentioned our concerns that the Bill could potentially result in the Service taking on “10 to 15 times” more investigations than it currently undertakes, and referred to our written evidence submission on the Bill, which was published on Parliament’s page on the Bill.

The Shadow Insolvency Minister also quoted Duncan with regards to serious rogue directors “not see[ing] being disqualified as a significant deterrent”, highlighted R3’s concerns around how the Government will use Compensation Orders to penalise directors and noted that insolvency is a “tried and tested way of recovering monies owed to creditors”.

The Minister of State for Housing, Communities and Local Government, Luke Hall MP, acknowledged Labour’s amendments but did not accept them. He said that the Government believes the Insolvency Service’s resources are “sufficient to take forward all cases where there is a realistic likelihood that investigation will result in the disqualification of directors, bankruptcy restrictions, the winding up of a company in the public interest or a successful prosecution”.

Nevertheless, we will continue to highlight our members’ concerns on this point – and others – as the Bill continues to progress through parliament after the summer recess, to help ensure that this important part of the UK’s corporate governance framework is improved effectively.