R3’s member survey on personal insolvency and COVID-19: Storm on the horizon

The results of R3's member survey on COVID-19 show that the majority of respondents expect a spike in personal insolvency numbers towards the end of this year, and the start of 2021. (This is similar to the findings among respondents to the survey who work in corporate insolvency.) With significant falls in employment between April and June, and the end of the furlough scheme on the horizon at the end of October, the outlook for many people's incomes looks cloudy - anyone finding themselves facing a shortfall in their income should talk to a qualified professional (such as an R3 member) to look into their next steps.

Of personal insolvency respondents to the survey, 40.9% said their workload had not changed as a result of the COVID-19 pandemic (the most popular response). Overall, 11.7% of respondents said they were busier than normal (2.2% "much busier" and 9.5% "somewhat busier"), while 45.3% said their workload was lighter than normal (17.5% "much lighter" and 27.7% "somewhat lighter"). 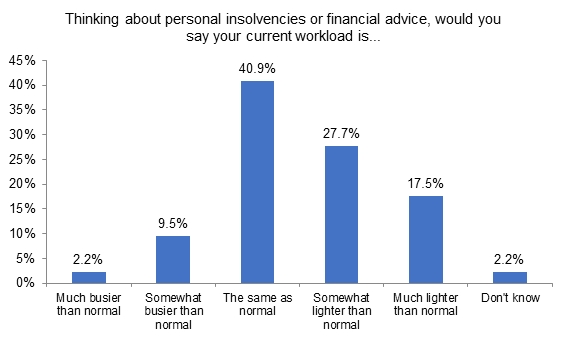 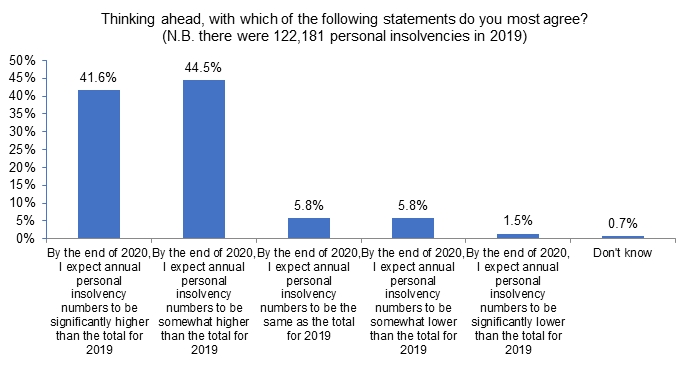 When asked to predict which debts or payments would be the most common immediate triggers for people seeking advice or insolvency solutions relating to their personal finances over the next 12 months, 74.2% of respondents said personal debt related to business failure. Half (50%) said credit card debt was likely to be a trigger, and 35% said unsecured bank loans or overdrafts.

n=120; respondents could choose up to 3 options

Respondents were also asked to rank in order of usefulness steps the Government could take to help individuals cope with the impact of COVID-19 on their personal finances. A third (33.3%) said an early introduction of the planned two month breathing space for personal debts would be the most useful Government intervention. Increasing the threshold of the COVID job retention support above £30k a year or to 80% of all salaries was seen as the 'most useful' option by 26.7% of respondents. A moratorium on creditor enforcement action was the top choice for 15% of survey respondents. 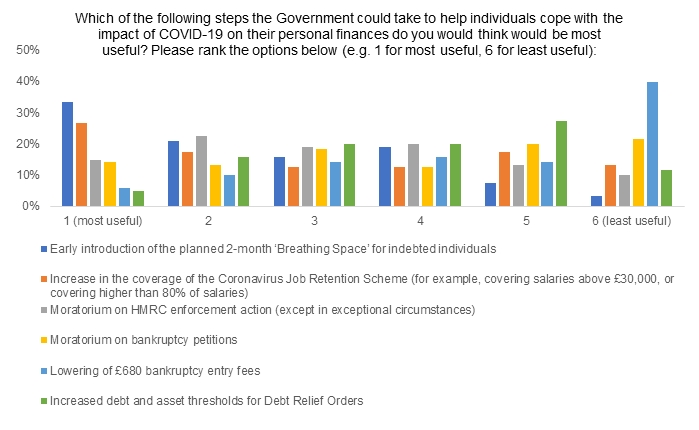 As the latest statistics for England and Wales show, personal insolvency numbers were higher in Q2 of this year than in Q1, and also higher than in the same quarter last year. Looking within those results, the rise has been entirely driven by higher numbers of Individual Voluntary Arrangements, with Debt Relief Order and bankruptcy numbers noticeably dropping off after lockdown was brought in towards the end of March.

It is difficult to guess how much higher the numbers of personal insolvencies in the UK would have been without the Government support provided to date, but with the end of these schemes in sight, there is some cause for concern. Due thought will need to be given to the best ways to help people facing unemployment or the closure of their business, or other causes of reduced income, in order to prevent the creation of a feedback loop of lower spending and a reduction in GDP.

As ever, though, the insolvency profession stands ready to provide advice on personal insolvency options to people facing tough financial circumstances - seeking out high-quality advice is often the first step in regaining financial stability, and should be accessed sooner rather than later.