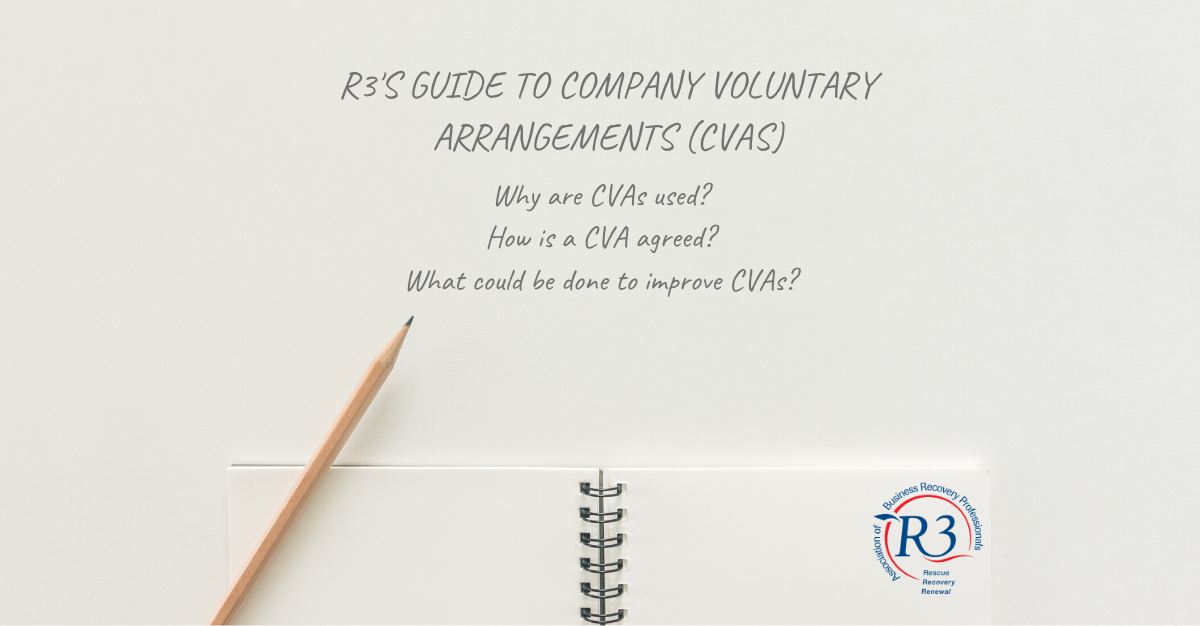 Everything you wanted to know about Company Voluntary Arrangements (CVAs)

What is a CVA?
A CVA is a binding procedure between a company and its creditors, and is one of several statutory corporate insolvency processes.

The procedure is extremely flexible, and the form which the CVA takes will depend on the terms of the proposal agreed by the creditors. For example, a CVA may involve delayed or reduced payments of debt over a set period of time, capital restructuring, or an orderly disposal of assets. In cases where a company has a number of sites, for example a retail chain with multiple shops, a CVA may be used to terminate lease agreements on poorly-performing outlets, and/or to reduce rents on remaining sites in order to ensure the ongoing survival of the company. It is important that a proposal for a CVA illustrates to creditors why the company has become insolvent or is about to become insolvent in order for creditors to understand the situation the company is dealing with.

CVAs often hit the headlines due to their use by well-known companies, especially on the High Street, but they are in fact fairly uncommon, making up only around 2% of all corporate insolvency procedures in 2018.

Why are CVAs used?
CVAs are a valuable business rescue tool. In the best case, when combined with new funding, they can turn around a company and maximise repayments to creditors. They are flexible and can be adapted to all sorts of financial situations. They require creditor approval – unlike other insolvency procedures, such as pre-pack administrations.

In a CVA, the management stays in control, which encourages directors to seek advice or take action early, without worrying about losing control of the company – increasing the chances of rescuing the business.

Because the business doesn’t disappear, CVAs can maintain supply chains, contracts and leases – this isn’t always possible in other types of insolvency procedure.

Importantly, CVAs, including when they are terminated early, can lead to a better return for creditors and stakeholders than alternative processes like liquidation: the business continues to operate and make payments to creditors which can exceed the returns from a simple sale of assets, while at least some, if not all, trading locations can be kept open. Even when a CVA can’t turn a company around, it can give the company’s stakeholders time to adapt and plan for the company’s eventual closure.

How is a CVA agreed?
CVAs are most often proposed by a company’s directors. To propose a CVA, directors must approach a licensed insolvency practitioner to act as a ‘nominee’. The nominee’s role is to give an opinion as to whether the CVA proposal has “a reasonable prospect of being approved and implemented”; if the nominee agrees that the CVA would meet this test, the opinion is filed at court and the proposal is put to the creditors of the company. The person acting as the nominee will frequently assist with the drafting of the CVA proposal but in the role of an advisor, separate to their role as nominee.

High-profile CVAs are invariably the product of several weeks of prior negotiations conducted by the company's advisors with principal creditors.

Creditors may apply to the court if the CVA’s terms are unfairly prejudicial or if there was some material irregularity in the procedure leading up to its approval.

Once approved, the CVA is given effect to under the supervision of (usually) the nominee (the nominee then becomes the ‘supervisor’). The CVA’s terms are then carried out in much the same way as any other commercial contract. If all creditors are paid what the CVA has promised, or if the supervisor is satisfied that it has substantially fulfilled its aims, the CVA will complete. If the company does not satisfy the terms of the CVA, for example, if it is unable to keep up with monthly payments, the CVA’s terms will often have provisions for how to deal with its termination. A CVA which terminates may lead to the company entering a subsequent insolvency procedure such as liquidation.

What could be done to improve CVAs?
CVAs can be criticised: not all of them meet their objectives, and creditors can feel like they have been left out of pocket. Ultimately, however, CVAs involve insolvent companies, and without the procedure, the outcomes for creditors would be worse.

R3 commissioned research into CVAs and why they succeed or fail, supported by ICAEW, and produced by the University of Wolverhampton and Aston University. The research was published in May 2018.

The research reviewed the progress of CVAs agreed in 2013, and found that 18.5% of those CVAs had been fully implemented, 16.5% were still ongoing, and 65% had been terminated without achieving all of their objectives.

However, the research found that early termination of a CVA is not necessarily indicative of the CVA having ‘failed’. Unsecured creditors regularly receive dividends from the CVA contributions, often in excess of what might commonly be expected in the likely alternative procedures, while creditors may also benefit from the continued trading relationship with the company during the CVA. Even if the CVA is followed by a terminal insolvency process, the extended trading period while ‘on notice’ of the company’s financial difficulties allows the creditor to take steps to ensure that it is not overly exposed should it ultimately lose the CVA company’s custom.

The research found common reasons for a CVA coming to a close early include:

The report noted that some companies have lost contracts simply because they have been in a CVA.

The report recommended making reforms to improve CVAs’ effectiveness, including: