The Z score has stood the test of time as a model that can be used to inspect and analyse the financial health of a business that has fallen into financial distress. Such a tool can be an invaluable help when considering questions of wrongful trading or other insolvency litigation.

Following BNY Corporate Trustees Services Ltd v. Eurosail UK 2007 3BL Plc 2013] UKSC 28, the test for insolvency under s123 (2) of the Insolvency Act is that on the balance of probabilities a company has insufficient assets to meet its liabilities. Carman v. Bucci [2014] EWCA Civ 383 clarified Eurosail with two side-by-side tests: is the company paying its debts as they fall due; and how is it doing so?

The burden of proof of these tests rests with the party that is asserting insolvency. Z scores are a tool that quantifies the balance of probabilities and may therefore give context to, if not evidence of, insolvency.

The original Z score model using financial ratios was first developed by Professor Edward Altman in the 1960s. At the time there was a divide among those who assessed corporate performance. On one side were practitioners using traditional ratio analysis from the financial accounts. On the other side were academics using statistical techniques.

Altman bridged the gap by blending various financial ratios into a statistical technique, which resulted in a model that generates a number: the Z score. The Z score puts a company into one of three zones:

The Z score was robust, classifying 95% of firms accurately a year before bankruptcy. Two years out from bankruptcy it classified 72% of firms correctly. Since then the Z score has proven to be a reliable tool for predicting bankruptcy in different contexts and markets.<1>

Questions of wrongful trading can be seen more fully through the lens of a Z score. For example, if a company can be shown to be in the distress zone for several years prior to an insolvency process, it may be harder for the directors to argue that they did not know, or could not reasonably have known, the position. Alternatively, if the company was in the safe zone and a process occurred in a short space of time, Z scores can support the case that the directors acted reasonably.

A Z score also allows issues to be analysed in both factual and counterfactual scenarios. For example, an antecedent transaction can be framed by showing the company’s solvency prospects with and without the transaction. Similarly, Z scores can show how a company’s solvency was affected by other actions of the directors, whether favourable or unfavourable.

Z scores can also be used where a corporate merger is being challenged under competition law. The failing firm defence can allow a deal to proceed if it can be shown that one of the firms would have otherwise failed (under EU Regulations 4064/89 & 139/2004 on the control of concentrations between undertakings). This can also be relevant to an insolvency process where parts of a business being put up for sale have attracted regulatory scrutiny.

The following example is based on a group of companies whose solvency rested on a single subsidiary. However, the ‘good’ subsidiary was extracted and the rest of the group collapsed shortly thereafter. The collapse was blamed on a subsequent ‘black swan’ event.<2> It was argued that without the black swan event the remainder of the group would have been fine.

Z scores provide a useful context for how the other subsidiaries were fairing in the lead up to the transaction: 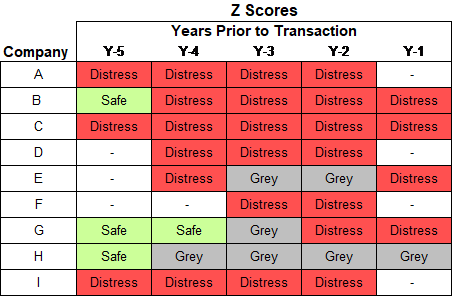 This analysis shows that the companies left behind had been in distress for several years prior to the transaction. As several of the subsidiaries were recent acquisitions, a fringe benefit of the Z score was that it showed their fortunes both before and after the directors’ stewardship.

The group’s solvency prospects can then be put in a with-and-without context:

Naturally Z scores are just a piece of the evidence jigsaw that a court may have before it. If all the above Z scores had been in the safe zone then the argument that the group would have been fine if not for the black swan may have been more convincing. The Z scores for Wrightbus Ltd, a Northern Ireland coach manufacturer, illustrate such a case. Here the company was not showing financial distress prior to entering administration:

The courts, being alive to the dangers of hindsight in directors’ disqualification cases, have established the ‘hindsight principle’. <3> In doing so, the courts were equated with the role of historians, with directors as the generals in the heat of battle. This is done to avoid unjust decisions stemming from hindsight bias. However, a Z score is a contemporaneous measure of what the directors knew, or should have known, when they signed the annual accounts.

Z scores are an established tool that are accepted by both practitioners and academics in assessing the financial health of a business. Z scores can give context to the solvency of an individual company and/or a group of companies. It can also distil a mass of financial ratios into one of three words: safe, grey or distress. In doing so, the Z score ties to the efficient market hypothesis, where businesses that are giving inadequate returns to investors either restructure their operations, get sold, or go out of business.<4>

The nature of Z scores means they are unbiased, and as such they can give context to how a firm was faring in the lead up to an actual or alleged insolvency.

Z scores should therefore be beneficial to insolvency litigation as they are:

The views in the above article are solely those of the author and do not necessarily reflect the views of Griffins, its partners, or its staff.

<2> Popularised by Nassim Taleb, black swan events are those which have immense effects, but defy prediction

<3> Re: Living Images Limited (1996) BCC 112. The ‘business judgment rule’ is a companion principle for the same reasons.

Trevor Slack is a partner at Griffins, specialising in valuation and forensic accounting.