R3’s member survey on corporate insolvency and COVID-19: The profession’s experience so far

It is hard to find many bright spots in the UK economic data published since the start of the COVID-19 pandemic. It has been a uniquely difficult time for businesses of all shapes and sizes, many of which are facing acute supply and demand shocks as a result of the lockdown.

However, largely thanks to the sheer scale of the Government support that has been extended to many businesses and individuals, the corporate insolvency statistics - now released on a monthly as well as quarterly basis by the Insolvency Service - have been a rare example of economic data confounding expectations, with 944 company insolvencies in May 2020, compared with 1,198 in April 2020 (down 21%), and 1,357 in May 2019 - a 32% fall.

We surveyed our members in early to mid May, to find out how the profession was finding levels of demand for its services, on both the personal and the corporate insolvency fronts.

The results tend to support anecdotal evidence from members that, during the first phases of the lockdown period, demand had been focused on advisory rather than formal insolvency procedures, including guidance on how to access Government support schemes.

The findings also tend to bear out the proposition that the Government's various schemes for businesses have been the main bulwark - to date - against a wave of corporate insolvencies. However, the survey also found that the profession expects this current state of relative calm to be followed by a wave of cases, with Q4 this year and Q1 next year expected to see a rise in corporate insolvency numbers.

This more or less mirrored the findings from the question relating to demand for services. Over the past month, around two in five respondents (38.1%) said demand for corporate insolvency procedures had increased (29.6% "somewhat" and 8.5% "significantly"); 15.9% said it had not changed; and over two in five (45.5%) said it had decreased (24.9% "somewhat" and 20.6% "significantly"). 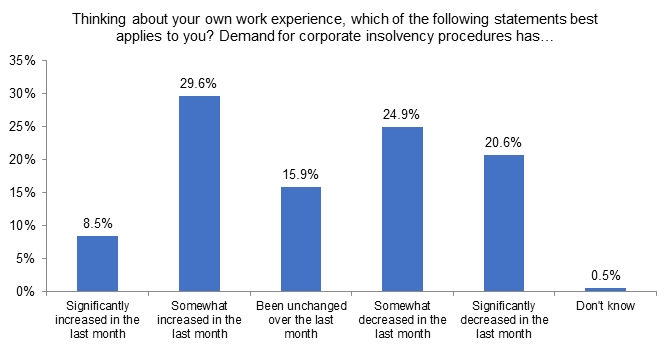 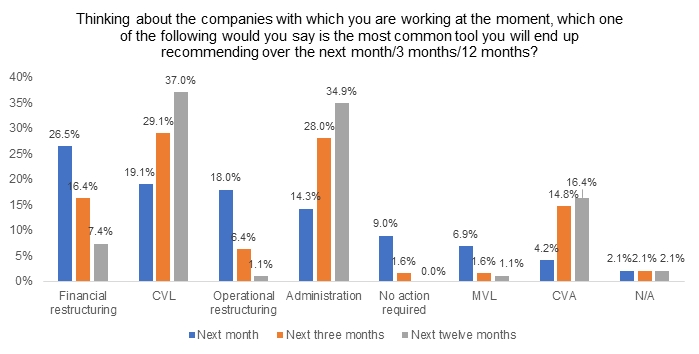 An overwhelming majority of survey respondents - 93.7% - expect corporate insolvency numbers to be higher than in 2019. More than half (56.1%) expect numbers to be significantly higher than in 2019; 37.6% expect them to be somewhat higher. More than half of respondents who expected corporate insolvency numbers to increase (56%) expect the increase to occur in October-December of this year, while 26.3% expect it to occur in January-March of 2021. 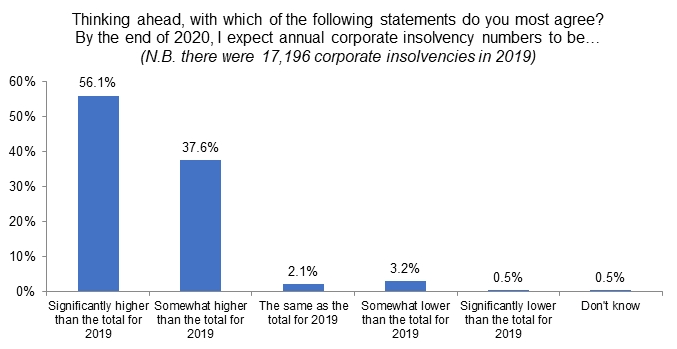 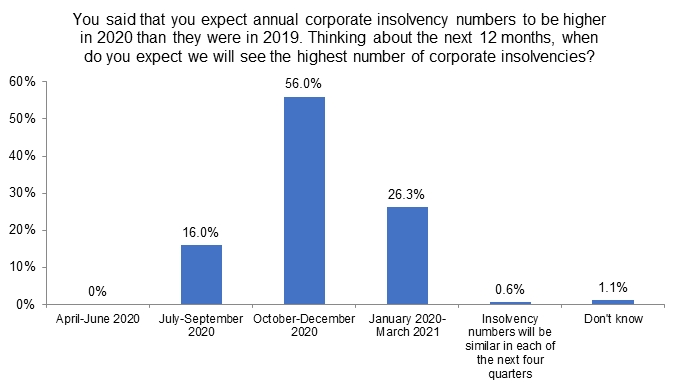 Respondents were also asked to rank in order of usefulness the steps the Government has taken to help businesses cope with the impact of COVID-19. 70.5% named the Job Retention Scheme, 45.9% said Tax Payment Deferrals, and 35% named the rates holiday as "very effective". 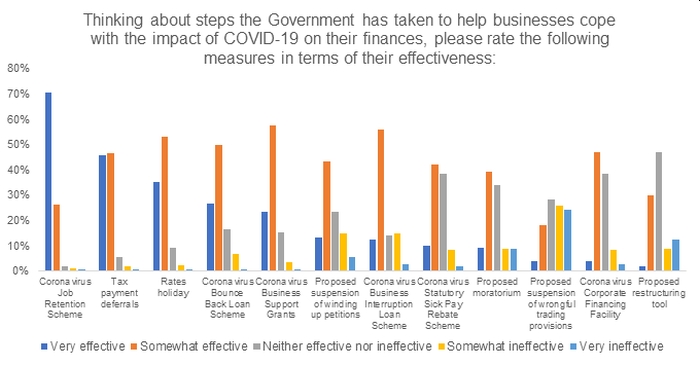 Unsurprisingly, those sectors which rely on face-to-face interactions were judged by respondents as being most vulnerable to the economic disruption of the pandemic, with 79.8% naming pubs/bars, 78.7% saying restaurants, and 63.9% tourism operators. 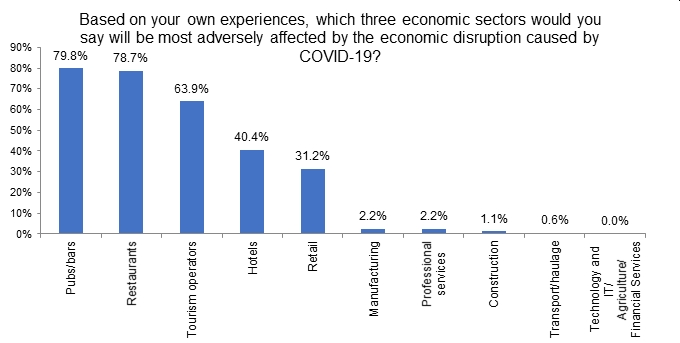 Our research indicates that the coming months are likely to be very busy ones for the profession. We expect activity levels towards the end of the year to increase, especially when the suspension of winding-up petition and statutory demand issuance is lifted after 30 September, unless the Government extends the suspension period. The end of October, when the furlough scheme is scheduled to draw to a close, will also be a crunch point, as will the end of Q1 2021, when repayment of deferred VAT will recommence.

The last three months of this year, and the first six of next are likely to be busy ones for the profession as it attempts to help businesses navigate the economic disruption caused by the coronavirus, the aftershocks this has created and the pre-existing trends it has exacerbated in many sectors.