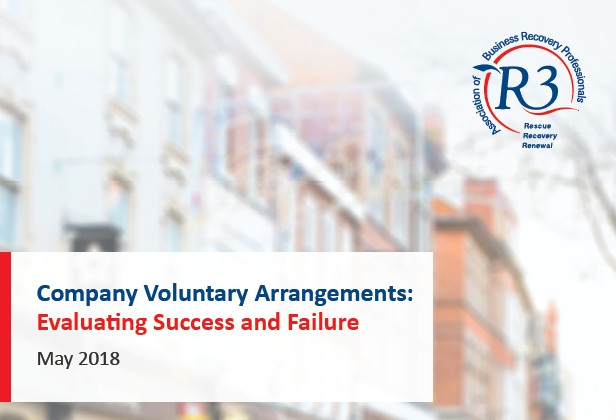 Reforms should be made to improve the effectiveness of Company Voluntary Arrangements, a common High Street insolvency procedure, according to research commissioned by insolvency and restructuring trade body R3 and supported by ICAEW.

The research report, produced by the University of Wolverhampton and Aston University, recommends a cap on CVA lengths, more time for companies to plan a CVA, clearer roles for directors and CVA supervisors, more engagement from public sector creditors, and the introduction of standard terms.

A Company Voluntary Arrangement (CVA) is a statutory insolvency procedure which sees an insolvent company and its creditors agree the repayment of a portion of the company's debts over a set period of time. The existing management stays in control of the company, while an insolvency practitioner reviews the CVA proposals and checks the terms of the CVA are met once approved.

Although CVAs made up just 1.8% of insolvencies in 2017, they often involve well-known brands. High Street chains Select, Carpetright, New Look, Prezzo, and Byron Hamburgers are among those reported to have sought or agreed a CVA so far this year.

CVAs have been said by some to have a high failure rate and questions have been asked about their benefits for creditors.

The research reviewed the progress of CVAs agreed in 2013, and found that 18.5% of those CVAs had been fully implemented, 16.5% are still ongoing, and 65% had been terminated without achieving all of their objectives.

However, the research also reveals that the early termination of a CVA does not automatically mean failure: terminated CVAs may return more money to creditors - the ultimate goal of any insolvency procedure - or otherwise be more beneficial for creditors than an administration or liquidation.

"CVAs are a very useful insolvency tool. In the best case, when combined with new funding, they can turn around a company and maximise repayments to creditors. Even where they don't meet all their objectives, they can still see more money returned to creditors than an alternative procedure."

Adrian Hyde adds: "Importantly, CVAs give creditors a direct say in the insolvency process, and are much more transparent than procedures like a 'pre-pack' administration which can be used in similar circumstances. CVAs are flexible and can be adapted to all sorts of situations.

"CVAs can be criticised, particularly given that not all of them meet their objectives and creditors can feel like they have been left out of pocket. Ultimately, however, we're talking about insolvent companies and without procedures like CVAs, the outcomes for creditors would be worse."

To further improve the perception and performance of CVAs, the report recommends:

CVAs should be capped at three years - CVAs typically last five years, but, the research shows, long CVAs increase pressure on the struggling company, increase the risk of failure, and do not guarantee better creditor returns.

Directors' and insolvency practitioners' (IPs) duties should be more clearly defined - Directors should be required to address financial distress at an earlier stage than now, while the IP's role in a CVA should be clarified and reporting enhanced. Consideration could be given to extending the existing system of insolvency fee estimates to CVAs.

Public sector creditors should have to explain why they won't support a CVA - The research found HMRC was the most likely creditor to oppose a CVA but that it provided little feedback on its reasons for doing so. This prevents an effective negotiation - and sometimes leads to a company's administration or liquidation, which can undermine returns to creditors, including the taxpayer.

Standard CVA terms and conditions should be introduced - Standard terms would improve the consistency of CVAs, reduce costs, and help build knowledge among stakeholders about how the process works.

Adrian Hyde adds: "The research makes a strong case for the Government to back reforms which could improve the effectiveness and reputation of CVAs. Government plans for a moratorium, which have been stalled since 2016, should be revived, for example. This would help in all insolvency cases, not just CVAs. There is also scope for the insolvency profession to make it clearer what the IP's role should be in a CVA and to improve the information provided to stakeholders."

The research notes that 'failed' CVAs may create a number of creditor benefits: higher returns than an alternative insolvency procedure; the benefit of continued trade with a company during a CVA; and the opportunity for creditors to create contingency plans should the CVA ultimately fail, allowing creditors to avoid the 'shock' of a loss of trade which might happen in an administration or liquidation.

The research found common reasons for a CVA coming to a close early include a failure of the company to make the required contributions, a failure to pay post-CVA creditors, a failure to meet HMRC liabilities, and the difficulty in trading when in a CVA. The report notes that some companies have lost contracts simply because they have been in a CVA.

Bob Pinder, ICAEW Regional Director, says: "The stigma surrounding going out of business in the UK prevents many from looking for help at the time it would provide the greatest chance of turning a business around. Being aware of the dangers facing a business as it enters a decline can transform an unrecoverable spiral of problems into a short dip in performance. The current culture of fear and embarrassment must change if further insolvencies are to be avoided and instead more companies should restructure or resolve problems to help bring the business back into recovery."

Professor Peter Walton, who carried out the research, says: "Whenever dealing with companies in financial distress, law and practice must strive to get the balance right between the rights of creditors on the one hand and the interests of other stakeholders on the other in order to ensure feasible businesses survive in circumstances that are transparent and fair. Not all companies in distress can or should be saved, but where they can be turned around, it is important to make turnaround processes as efficient and timely as is reasonable. Our report highlights a number of ways in which we believe CVAs can be made to work more effectively for the benefit of all stakeholders."

R3's report into CVAs (May 2018), supported by ICAEW and produced by the University of Wolverhampton and Aston University